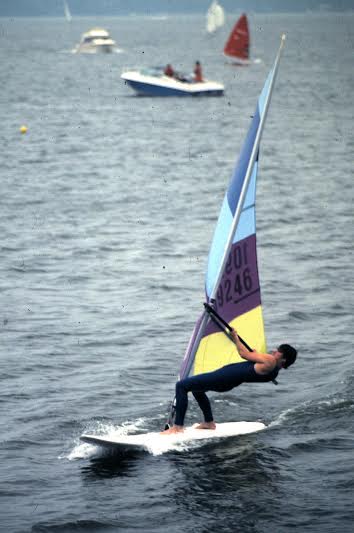 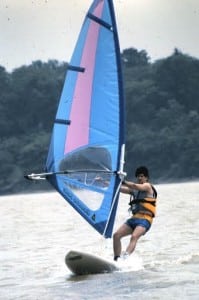 When I started getting into windsurfing waaay back when I didn’t see myself racing or putzing along(we call it schlogging now) as all the other windsurfers were doing, I saw myself terrorizing the water ways, riding waves & jumping everything in sight, there were not a lot of guys close to doing what I considered  “windsurfing” BUT 2 guys in the area seemed to have the same vision, they were the Chamberlin brothers. They seemed to be riding at a level light years ahead of all the others. They rode shorter boards than most, they did dumb stuff, they drank & carried on, they rode big wind, they chased the wind & they rode Lake Erie. Man I wanted to ride like that! Mike & Tom were really fun to ride with, I learned all I could from them watching there every move on the water, trying to emulate how they rode. If  I could just jibe like Tom I would be dangerous! Tom was more of the technician, Mike was…..well Mike. I remember riding at Crane Creek & Mike rams my board- board tag he called it- jumps on it & walks down to me as I holding the sail & pushes me off my board & sails away with it. I was pirated, how cool was that I thought to myself. They allowed my sorry sailing butt to ride with them, took the time to give me pointers & kicked my rear end out on the water.

Skip back in time for a little history~ Mike founded 1 of the 1st windsurfing groups in the US-the Blackswamp boardsailers. He did lessons & demos to get people into the sport & he did a lot of the selling & buying of windsurf gear when it was in its hey day at the Mountain Man shop. Mike was instrumental in the growth of windsurfing & water sports in this region. He was fun to ride with & a good guy. Mike died last January after a long battle with cancer. If you windsurf or kiteboard around Maumee Bay Mike probably had a influence on you that you probably aren’t even aware of be it water access or just the simple fact there is riding scene around here. Mike was very influential on my riding & as the years passed I took great pride in hearing Mike & Tom, my mentors, compliment my riding, pics & vids-basically all rooted in their riding-it’s what I learned from them & ran with. Mike Chamberlin- R.I.P. 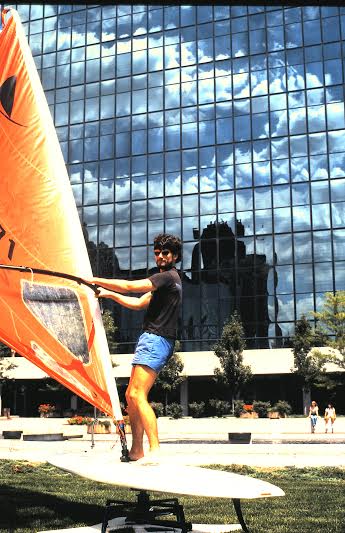